This page contains definitions of terms that you will encounter in the rest of this hub and as you search for health sciences information. If you come across a term you don’t know, look it up on this page.

Academic integrity means upholding your school's values concerning the production of your academic work and the completion of quizzes, tests, and exams. Every college in Ontario has an academic integrity policy.

Plagiarism is an offence that is covered under academic integrity policies.

Boolean Operators, including are words that make it easy for you to customize the results of your search by combining or excluding search terms.

A citation manager (also known as a reference manager) is a software program for saving and organizing a list of materials (articles, books, etc.) that you may want to use in the future. Citation managers can also generate APA-formatted citations.

A concept map is a diagram visually representing the relationships among concepts. It is an alternative method to PICO for narrowing down your topic question. Concept mapping involves developing a concept map or mind map around your topic.

The mind map below was created using Popplet. 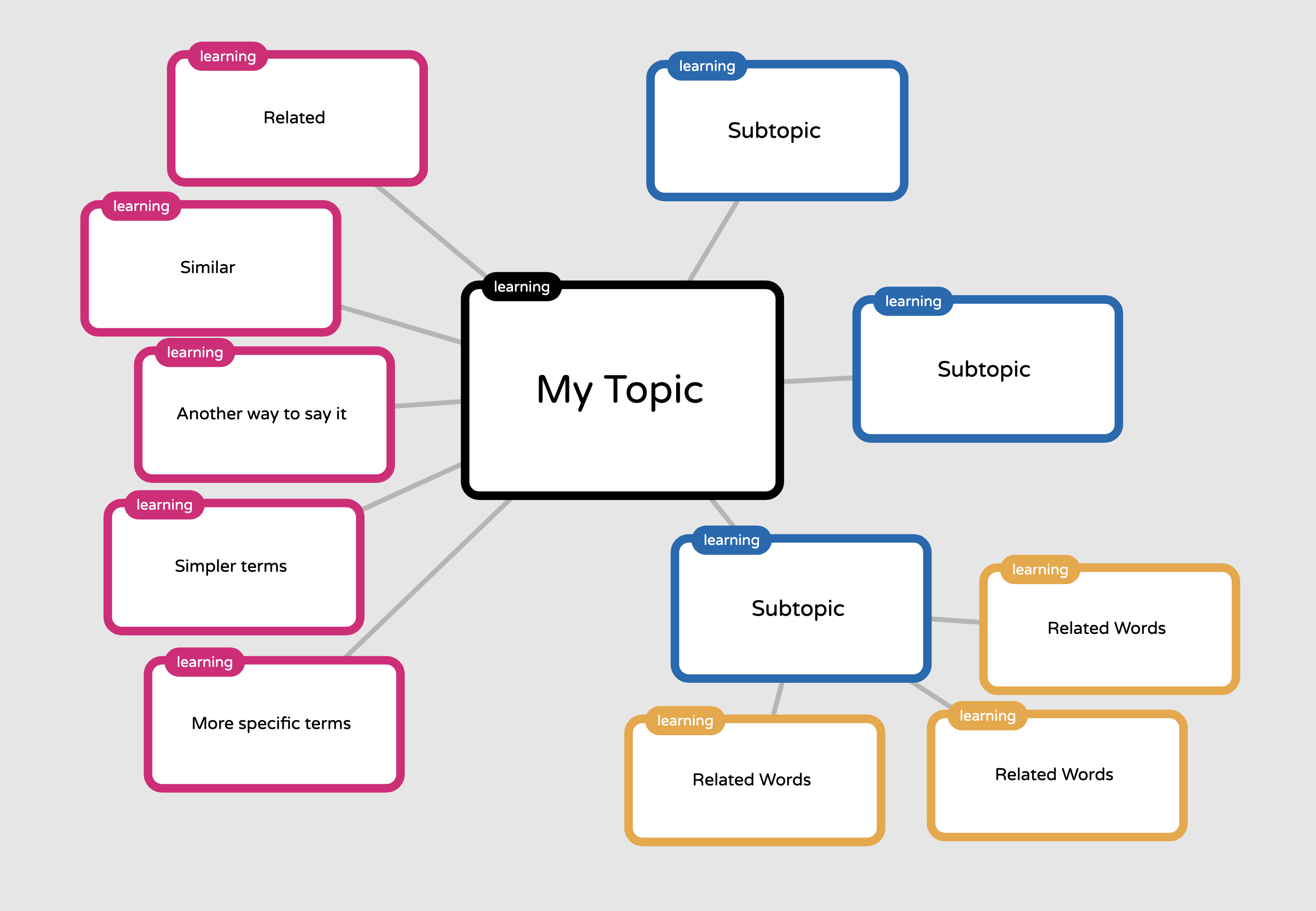 Critical appraisal tools are resources to help you evaluate journal articles and other materials. They are often presented as checklists.

Databases are searchable collections of resources on a variety of subjects. The content found in databases can include journal articles, newspaper articles, encyclopedia articles, streaming media, and more.

Database platforms are the interfaces used to access the content of a database. Vendors with their own database platform include Ovid, EBSCO, ProQuest, and Gale.

A discovery layer is a multidisciplinary search tool. Discovery layers are like search engines (think: Google) for library content. They search across most of the databases and resources in your library’s collection. Your institution likely offers a discovery layer search on the library’s website.

A qualitative study involving observing interactions between residents and caregivers at a long-term care facility and a quantitative statistical analysis of the correlation between a hospital’s promotion of handwashing hygiene and their rate of healthcare-associated infections are both examples of empirical research.

In the context of these modules (and in the context of Evidence-Based Practice), evidence refers to the results of scientific research. Evidence can be ranked using the hierarchy of evidence.

Evidence-based (or evidence-informed) practice means using current best evidence in making decisions about the care of the individual patient. It means integrating individual clinical expertise with the best available clinical evidence from research.

Filters (also known as limits or limiters) are options in discovery layers and databases that refine your search by removing search results that do not match specific criteria.

Selecting the Full Text filter will remove any results where you don’t have access to the full text (the entire article).

Full text is the complete content of an article or other resource. When you find an article through a search interface, you will typically first arrive at a record, and then click through to the full text. Full text is usually available in PDF or HTML format.

Grey literature is material published by organizations that are not primarily publishers. These materials can be made available by the government, academia, non-for-profit, business and trade organizations, in print and digital formats.

Typically illustrated as a pyramid, the hierarchy of evidence is a way of ranking the “best evidence,” from weaker methods at the bottom to stronger methods such as meta-analysis and systematic reviews at the top.

The Respiratory Therapy Society of Ontario provides an example of the hierarchy of evidence. Please note that there are slight variations in the hierarchy among different organizations.

Interlibrary loan (ILL) is the process that allows library staff to request a copy of the full text of an article or other resource from another library. Many libraries allow students to request articles via ILL.

Keywords are words that hold the essence, or the key idea, of what you are trying to find. Using relevant keywords in your search will lead you to better information.

Natural language is when you type a question in the same way you might ask it in a conversation. Natural language searching works fine when casually Googling something, but when searching databases, you should use keywords or more advanced techniques.

What are the health benefits of regular exercise?

Open access journals are online academic publications that are made available to readers without subscription fees, free of charge.

Some journals (categorized as “peer-reviewed journals”) specifically publish articles that have been peer-reviewed. In order for an article to be published in a peer-reviewed journal, it has to go through a formal submission process which includes a peer review stage where experts (“peers”) ensure the accuracy, originality, significance, and other characteristics of the research before it is accepted for publication. These articles are highly regarded because the findings and results have been reviewed by experts in the field.

Advances in Nursing Sciences. Note that this journal requires a subscription. Check your college library to access the article.

PICO is a series of questions that help you create a strong topic. PICO stands for Patient/Population/Problem, Intervention/Exposure, Comparison, and Outcome

A plugin is a piece of software that can be added to a program to provide additional functionality.

Citation managers come with plugins for Microsoft Word that allow you to format and insert citations directly into your paper.

Popular magazines publish articles that typically focus on information from pop culture. Articles are usually short, with a casual tone, and often have images embedded throughout.

A PRISMA flow diagram is a specific format for documenting your search. It was designed for researchers performing systematic reviews and meta-analyses. PRISMA stands for Preferred Reporting Items for Systematic Reviews and Meta-Analyses.

If software is proprietary (also known as closed source), it means users cannot see the source code or modify the program. Proprietary software may be free or paid.

Qualitative research is a type of empirical research that uses methodologies such as biography, case study, historical analysis, and ethnography. Compared to quantitative research, qualitative methods focus less on things that can be measured using numbers and more on describing people’s behaviours and experiences.

A study involving observing interactions between residents and caregivers at a long-term care facility, as well as conducting open-ended interviews with residents about the quality of care they receive.

Quantitative research is a type of empirical research that uses methodologies such as questionnaires, structured observations and experiments. Compared to qualitative research, quantitative methods focus less on describing people’s behaviours and experiences and more on things that can be measured using numbers.

A statistical analysis of the correlation between a hospital’s promotion of handwashing hygiene and their rate of healthcare-associated infections.

A record in a database or other search interface contains information about an article, such as the names of the authors, the title of the journal, the abstract, and more. In order to use the article for an assignment, you will need to go from the record to the full text.

Every APA-style assignment or article must have a References list at the end, which contains the full reference for each in-text citation in the body of the paper.

Watch the video “Building a References List in APA.”

Reflective writing involves thinking critically about your own experience and feelings. It is a component of reflective practice, which is an essential practice for nurses and other health care practitioners.

Consider a situation you were in, analyze why it happened the way it did, and consider if anything could/ should have been done differently.

Related terms are words that generally mean the same thing as the main keywords.

A research question is a topic that is put into the form of a specific, answerable question.

Research question: In nursing home residents with osteoporosis, do hip protectors result in fewer injuries from slips, trips, and falls when compared with standard osteoporosis drug therapy over the course of their stay?

You wrote a paper on steam engines and then copied some paragraphs into a later essay on thermodynamics. This is self-plagiarism because you copied your own work.

A scholarly journal is a publication, often published monthly or quarterly, that publishes academic research articles. Scholarly journals are often, but not always, peer reviewed.

Canadian Journal of Nursing Research - open in a new window. Note that this journal requires a subscription. Check your college library to access the article.

Scholarly writing (also known as academic writing) involves analyzing, synthesizing, and evaluating scholarly literature. This is the style of writing that scholarly articles are written in.

Literature Reviews are a type of scholarly writing. They involve summarizing what is known about a topic based on scholarly sources and synthesizing those ideas.

A scoping review is a broad review of the size and scope of the evidence on a specific research question. It is similar to a systematic review, but it aims to address broader, often exploratory research questions. Scoping reviews are often conducted to identify gaps in the literature.

A search engine is an interface for searching the web.

A subject heading is a word or phrase that is assigned to an article or other resource and describes the topic of the resource. MeSH and CINAHL Subject Headings are two systems of subject headings.

Synonyms are words that have the same, or similar meaning as the main keywords. Synonyms of keywords are interchangeable, which means that the meaning of your search will remain the same.

Secondary use of standardized nursing care data for advancing nursing science and practice: a systematic review

Trade magazines (also known as trade journals) publish articles aimed at people working in a particular field. The content focuses on information about working in the profession, trends, and news related to that field or trade, rather than academic research.

To ‘truncate’ a word simply means to shorten it by removing one or more letters to go back to the root word. When you truncate a word, the search interface will retrieve all words that share the same root.

Searching for nurs* would return results for nursing, nurse, and nurses.

A wildcard is a special character that replaces one or more letters in a word when searching in order to find variations of the word, such as alternate spellings.

p#diatric (the # could replace one extra letter, and search results will include pediatric or paediatric)