This module is an introduction to "Net Neutrality" which means that all data on the internet would be treated equally with no inflated fees for faster downloading and uploading to the internet, or for access to certain services. Net neutrality advocates the same model we use for public utilities, such as electricity or water.

2017 - Telecom Regulatory Policy CRTC 2017-104 - the CRTC established a new framework - Opens in new window regarding differential pricing practices. It strengthens the CRTC’s commitment to net neutrality by declaring that Internet service providers should treat data traffic equally.
2015 - The CRTC issued a decision - Opens in new window in 2015 in which it directed certain service providers to stop giving their mobile television services an unfair advantage in the marketplace, to the disadvantage of other Internet content.
2009 - Telecom Regulatory Policy CRTC 2009-657 - includes considerations - Opens in new window for net neutrality including Transparency, Clarity, and Competitive Neutrality

The EFF collects on-going information about net neutrality proceedings. - Opens in a new window Currently there are no net neutrality regulations in the U.S.A.:

2019 - The 2017 decision is upheld but the appeals court ruled that state-level net neutrality laws could not be overridden.

2017 - The FCC votes to repeal Net Neutrality regulations. The government will no longer regulate high-speed internet1and individual States cannot override the ruling of the FCC in local legislation.

2017 - The FCC votes to exempt small ISPs (250,000 or fewer subscribers) from the net neutrality rules, citing the compliance procedures are too onerous and expensive for small companies.2

2015 - The FCC "voted to classify broadband as a telecom service under Title II of the Communications Act rather than an information service. What that means is that the FCC will have more authority to regulate ISPs, while its net neutrality rules will have a stronger legal footing."3
2010 - The FCC approved three high-level rules supporting net neutrality: transparency; no blocking; and no unreasonable discrimination.4

"In October 2015 the first EU-wide Net Neutrality rules were adopted. EU rules on net neutrality (open internet) apply as of 30 April 2016, following the adoption of Regulation (EU) 2015/2120 on 25 November 2015" from European Commission - Opens in a new window 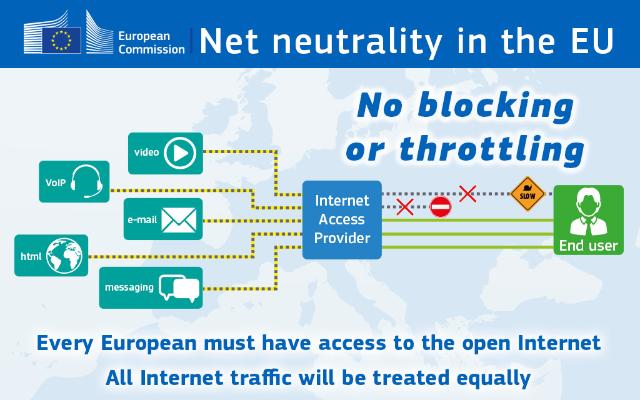 What is Net Neutrality?

What Net Neutrality Means to You

Videos shared on this page fall outside of the Learning Portal's Creative Commons license.